Forecasters predicted rain for today. Turned out to be a sunny day in the 80’s. I don’t remember Metairie being quite so crowded on Mardi Gras Day. Maybe it was the non stop running for the last four days, but today was just tiresome. Sooooo many people. 18 wheeler floats that the riders couldn’t really even see the kiddos. Even I put Mad & Bitty on my shoulders so they could be seen. Today we left with the least amount of throws. Honestly, we didn’t even care. We enjoyed the last few days so much that today just didn’t matter quite as much. We enjoyed hanging out with friends and family on the parade route. And ducked out just in time to beat most of the traffic. All in all I’d say our girls had a tremendous amount of fun this Mardi Gras season and I’m so thankful we were able to be here! 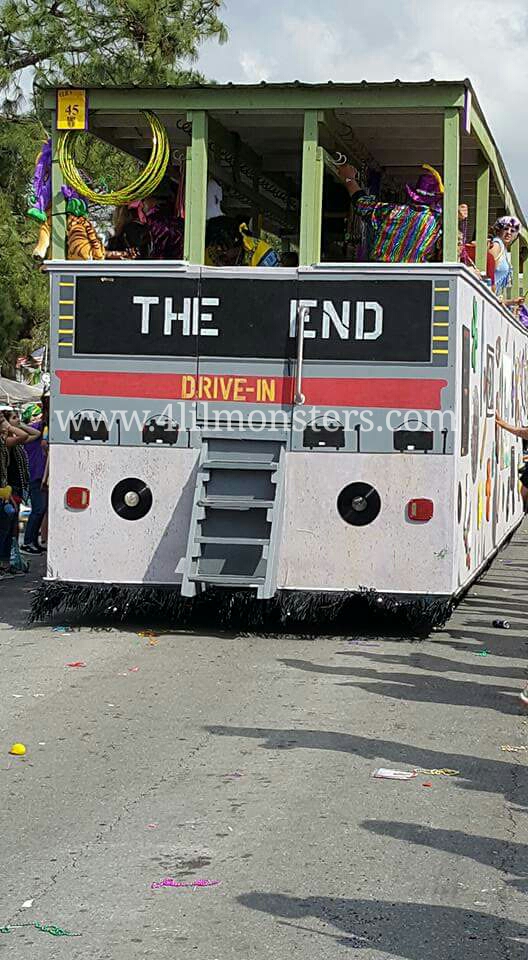 We decided to attempt to sleep in and start the day slowly. While we didn’t actually sleep in it was nice to take our time getting moving. Paw-Paw went with us to da parish to meet up with Sandy and her family for lunch at Ben’s. Then we took all the kiddos to cafe du monde in Metairie (wasn’t about to attempt Decatur street on Lundi Gras with five munchkins). 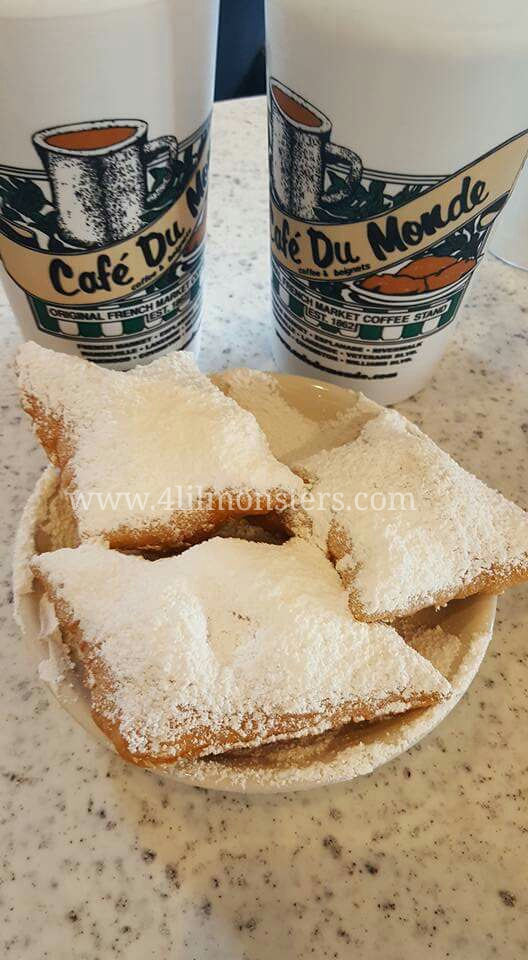 After a fun day with the kiddos, we dropped the girls off to Gigi for an evening of crafting. While we hit Bourbon street with Sandy, Chris, and Dad. We even found one of our Texas friends, Nene, on Bourbon! 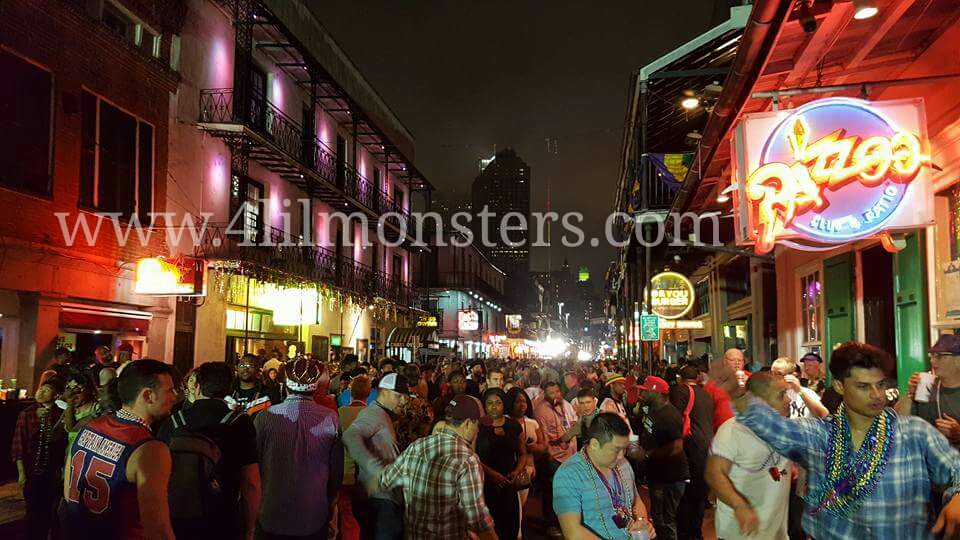 We hit New Orleans running since Friday night and today was no different. Late nights and early starts with so much fun in between! 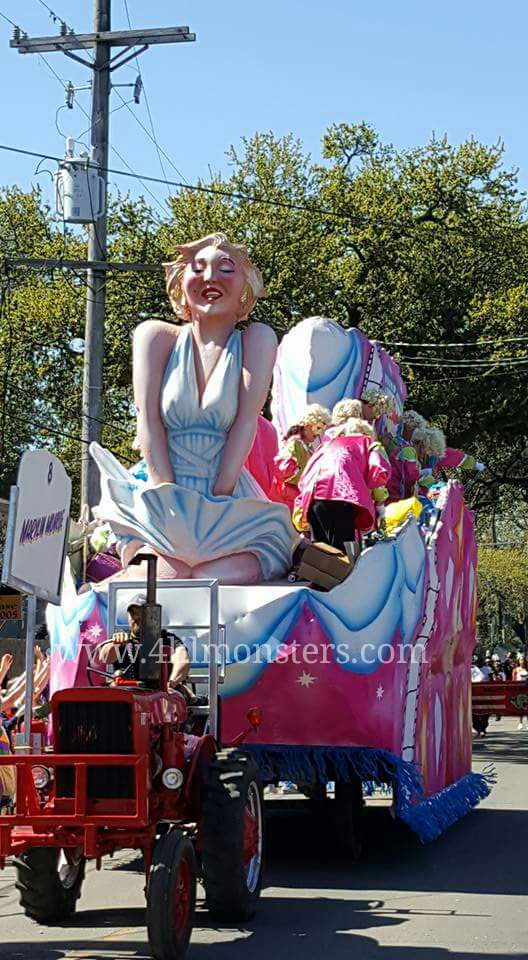 Today we spent the day with my best friend in front of her mom’s office on Magazine to catch a few uptown parades. 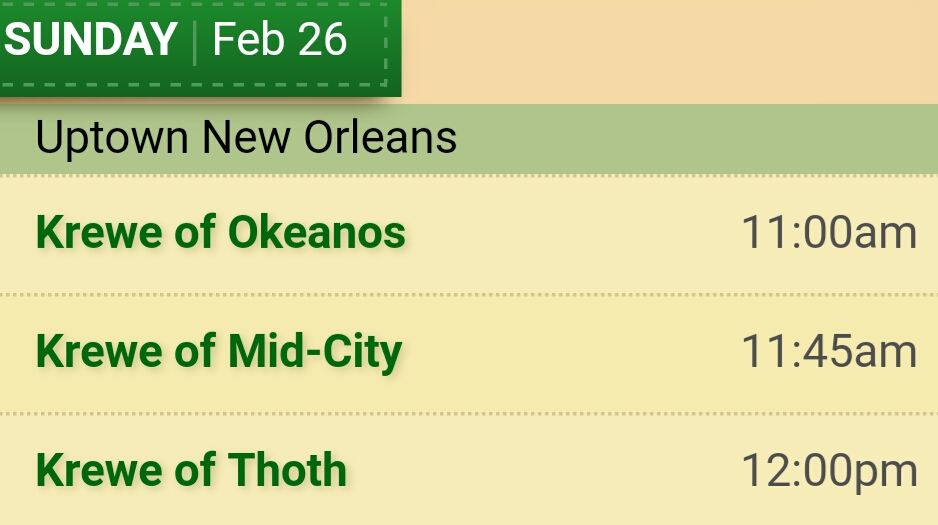 This was our favorite parade day with the girls. Paw-Paw & Gigi seemed to love watching them enjoy their day too! It was a day of three back to back parades which lead to hours worth of fun once they started rolling past us. 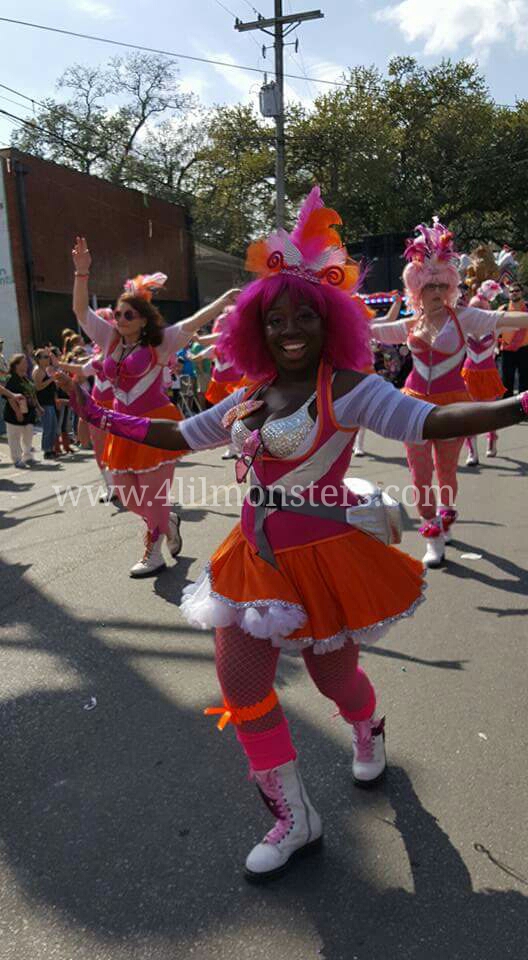 We left with so much loot I started to wonder how we would get it all home! After the parade we took the kids with Mad & Aub’s NOLA besties too (my best friend’s kiddos) to get some ice cream at the famous creole creamery. It was the perfect end to a perfect day! 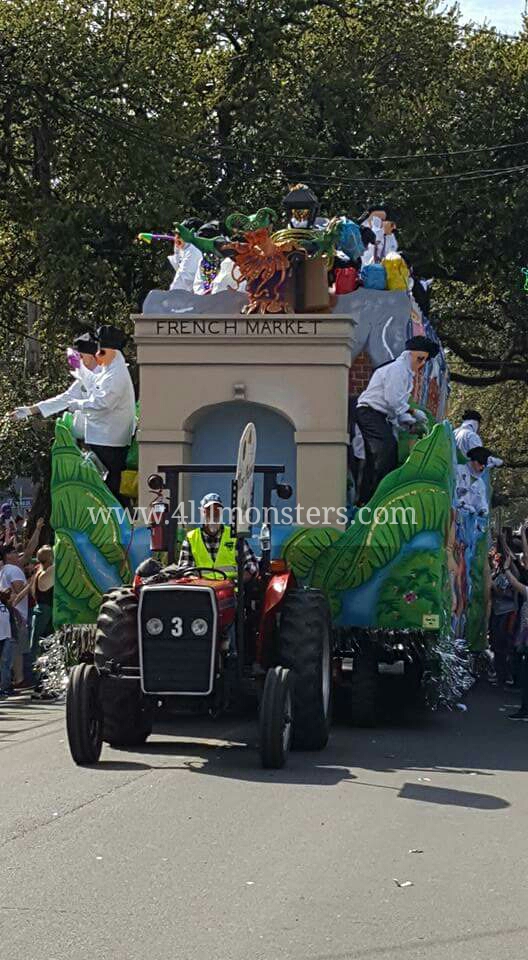 I suck at early mornings, but today was easier to get up because it meant seeing Mandy & Derek! At 7am I was up making Mardi Gras jello shots before I even had coffee.

I met Mandy online five years ago when she looked up #brusselsprouts. Who knew a picture of something I cooked could land me one of my favorite friends? I got to finally hug her three years ago when Matt & I went to Chicago. Imagine how excited I was when she asked me to meet her in NOLA for her first Mardi Gras!

We picked them up and took them to cafe du monde. Derek had a real interest in seeing an alligator, so we took them to the end of the world to look for one. And possibly ran for our lives from one while taking a picture. That was the day my two tall friends learned how fast these short legs could move while making sure I didn’t become alligator bait. All while my husband played it safe and stayed inside the vehicle. 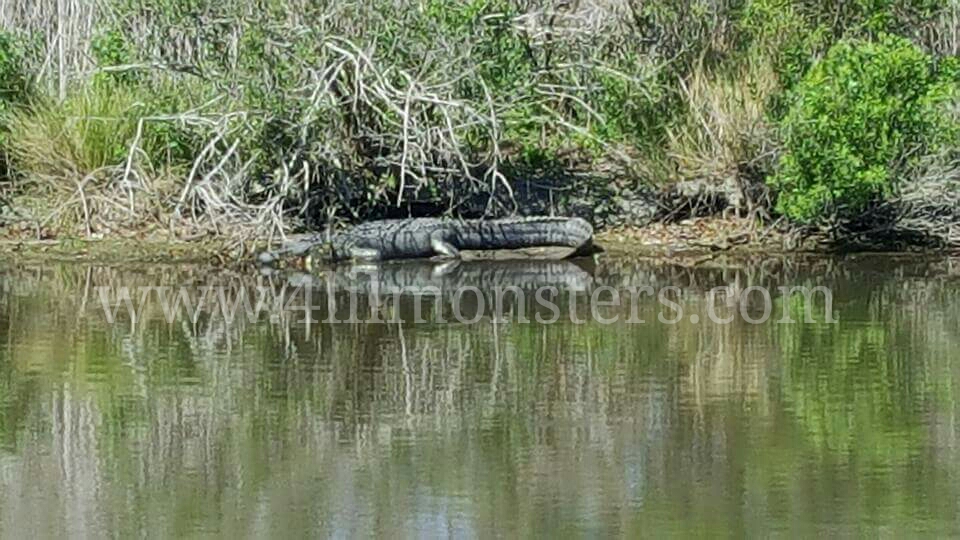 After lunch at Rocky’s we took them for a quick run through the Chalmette battle field so they could see 200 year old oak trees and walk up on the levee.

Then came the real fun. We took them to the biggest parade of the season, Endymion. This was my first kiddo free parade in over two decades! We don’t typically do Endymion because of the large crowds and knowing the girls wouldn’t have near as much fun. Another friend invited us to go to their spot on Canal St that included a clean bathroom across the street, a rare find while at parades. Matt and Derek seemed to enjoy watching Mandy and I collecting big beads, cups, dabloons, and a hula hoop. 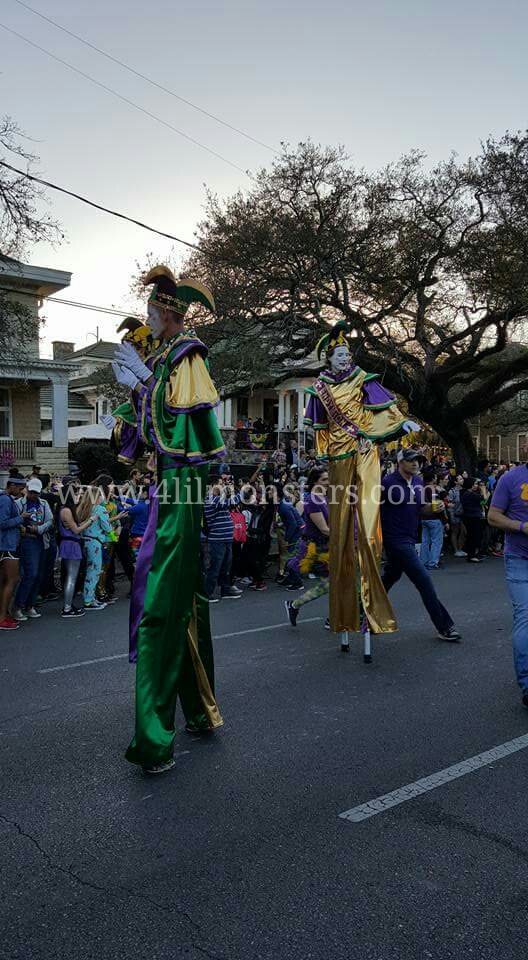 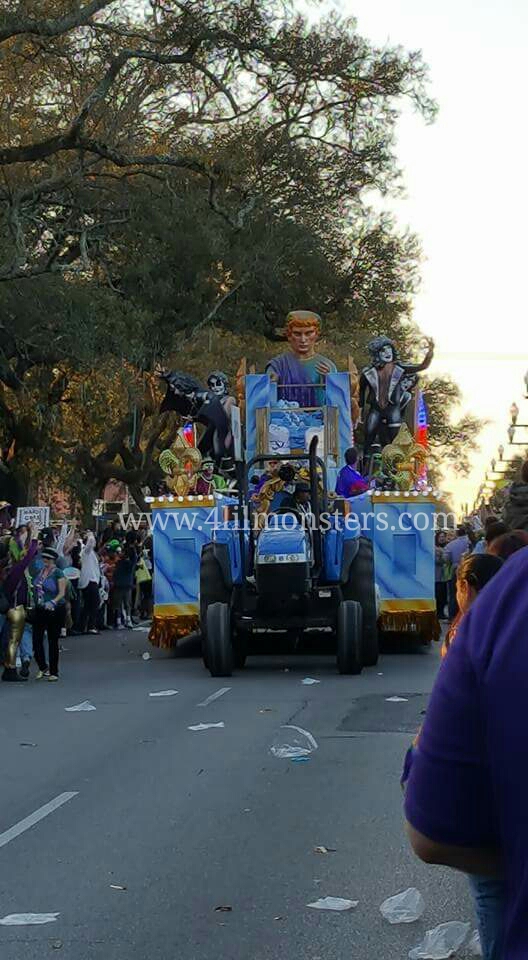 Little did we know while we were having a blast a mile from where we were standing a young guy drove his truck into a crowd at the very parade we were enjoying. Little did we know while we had no phone service for five hours on that parade route our daughter who had been enjoying the day with Paw-Paw & Gigi had heard about the accident and also knew where we were. She had no idea that I wasn’t answering her text because I didn’t get them all until we were walking back to our car and finding out about what had happened at the same time. Talk about a crummy feeling.

After we left the parade we took a drive through the quarter, but all opted to not go walk it because we all had an early start the following day too.

I’m so happy we got to spend the day with them and can hardly wait to see them again! 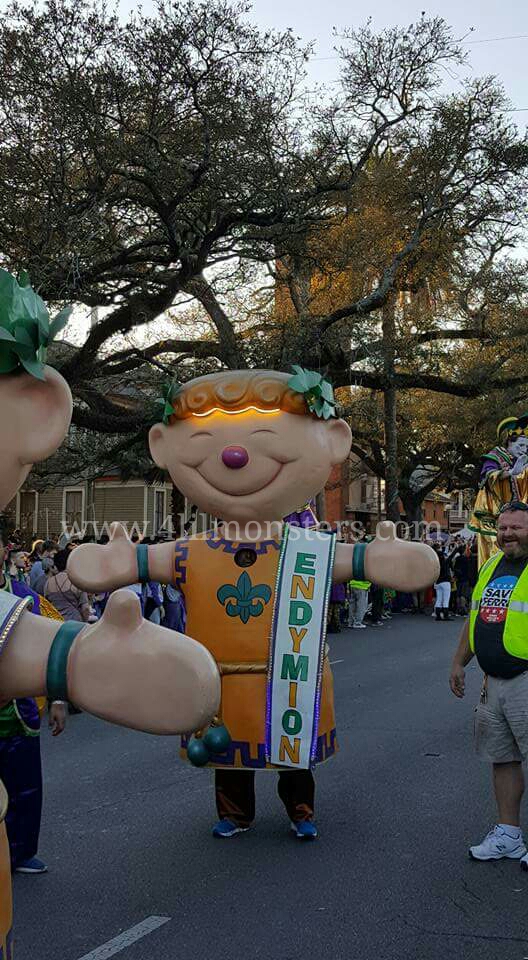 Checked the little ladies out of school today and traveled 600 miles to enjoy our first parade of the season in Slidell with my dad, gigi, & my best friend’s family. We got there just as the first float was rolling by. Bitty caught her Nannie Boo’s frog that she asked her to get for her. Aubrie lost her tooth on the parade route…it was never found. And Mad had a blast hanging out with her best friend too. 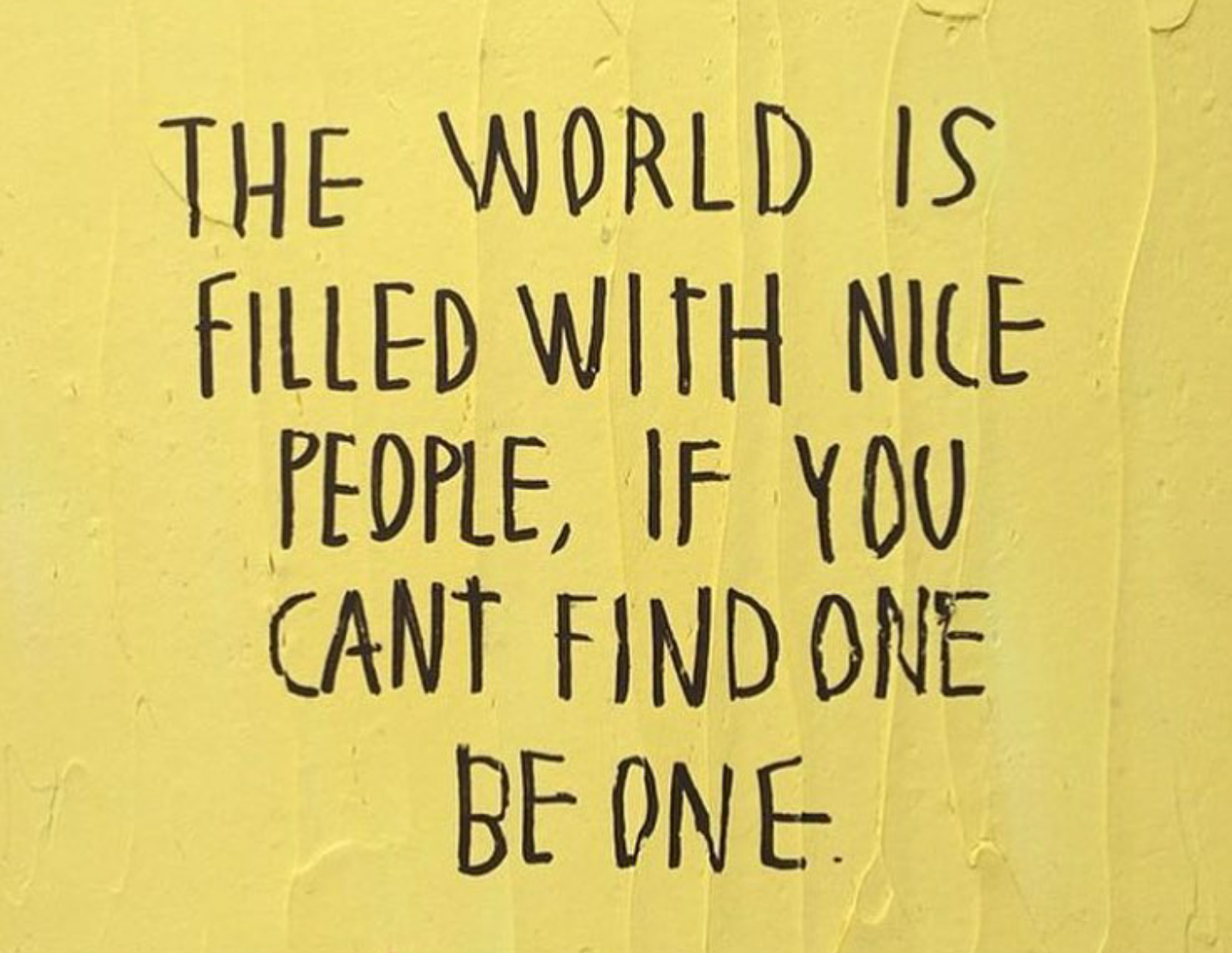 Bitty: “I finished my breakfast!”

Me: “Yep, and you got crumbs all over the floor didn’t you cupcake.”

Ha ha, I don’t think our five year old knows what that word means, because she’s not a crummy kid! 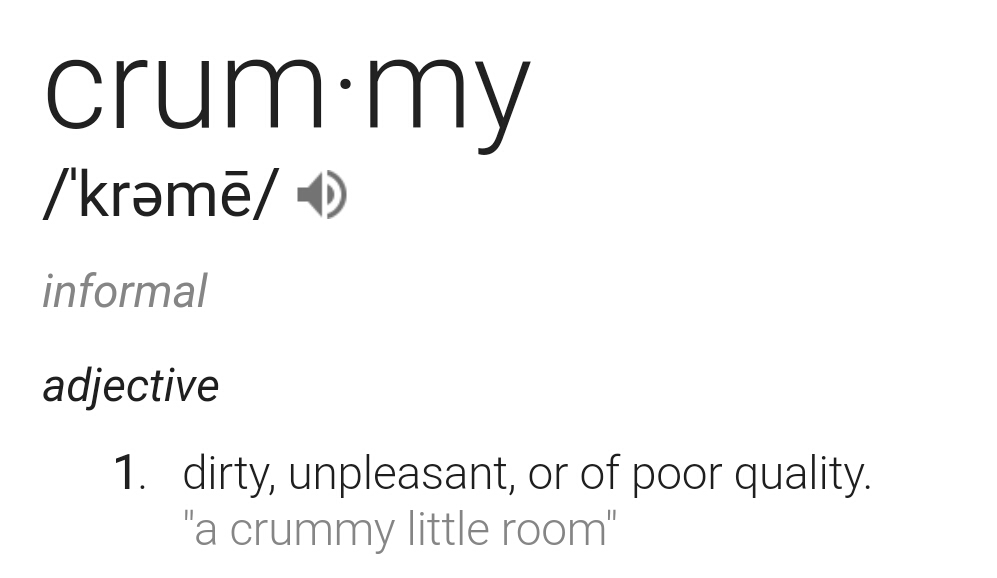 I read this quote today and it made me laugh out loud:

“Don’t compare yourself to other mothers. We are all loosing our shit. Some just hide it better than others.”

How true is this? I mean really we are all just doing the best we possibly can. My lil monsters are my world. I’m anything but a perfect mama, but I will forever give them my all. I think some people take social media too serious. Try so hard to “seem perfect” at all times. I love my mama friends and family that are honest about life. Not everything in life is peachy. Some days are just tough. Some days our kiddos even have bad days. Some days we really are all loosing our shit, ha ha. Sometimes we go into something with the best of intentions and well life has other plans. Tantrums are throw, shoes go missing, sofas get drawn on with sharpies and are the furthest thing from your biggest worry. It’s okay to laugh about it. It’s okay to not be a perfect mom. It’s okay to give it your all and some days think you may totally be failing at this mom gig. It’s also okay to share it with your friends and make them feel normal too!

Incidentally, today I discovered Bitty’s sharpie art on our sofa. I’m about to go to sleep and it’s still there. I’m okay with this fact. I’ll clean it and someday I’ll miss her little art mishaps. So I choose to laugh about it, of course not in front of her:) 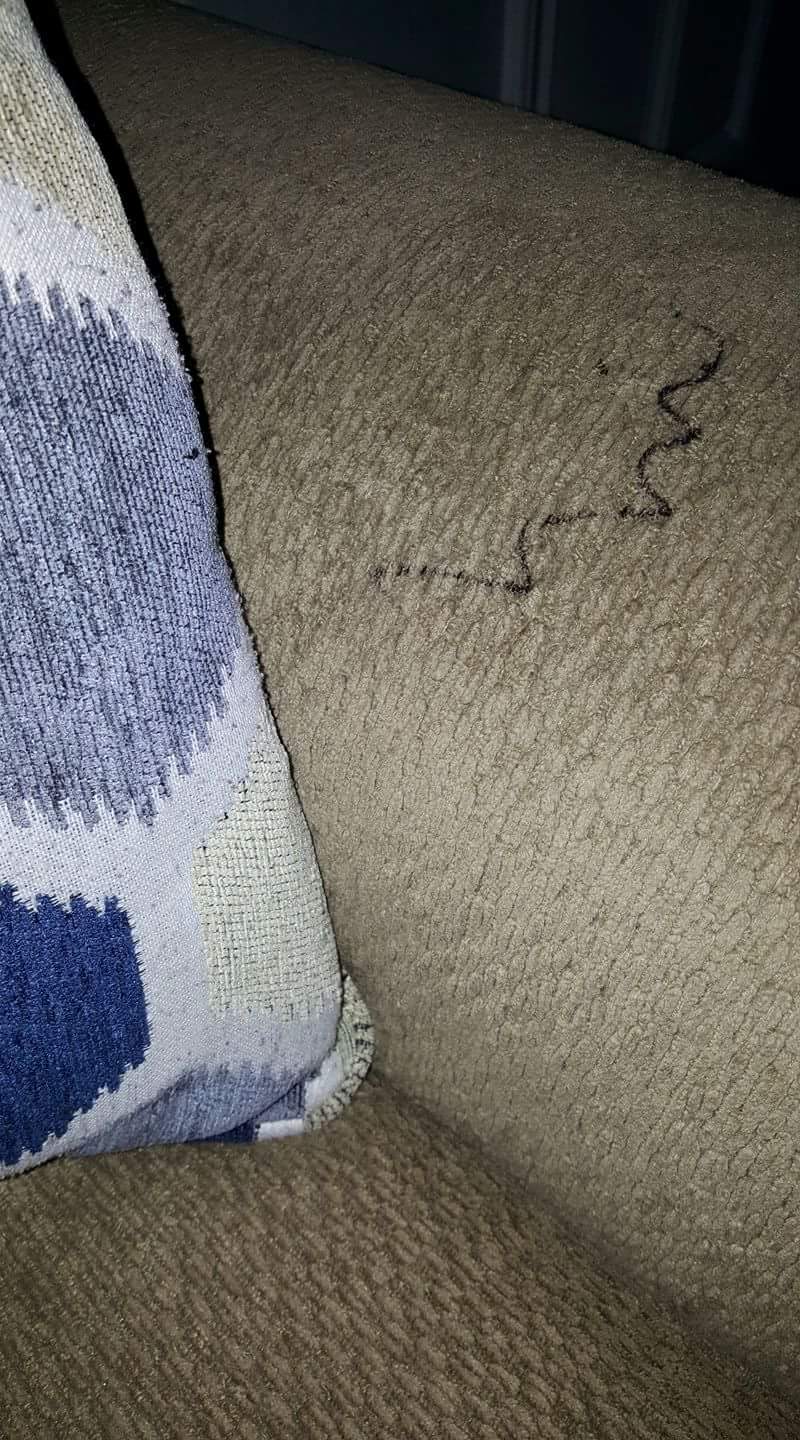 Our littles had the day off of school for president’s day. A day we were thankful to have home to take it a little easy after a scary restless night that involved tornado warnings. All three girls wanted to sleep downstairs after the storm passed through, and honestly I was glad to have them closer to us. Even if that involved Bitty kicking us all night. Nothing a little coffee couldn’t cure right? 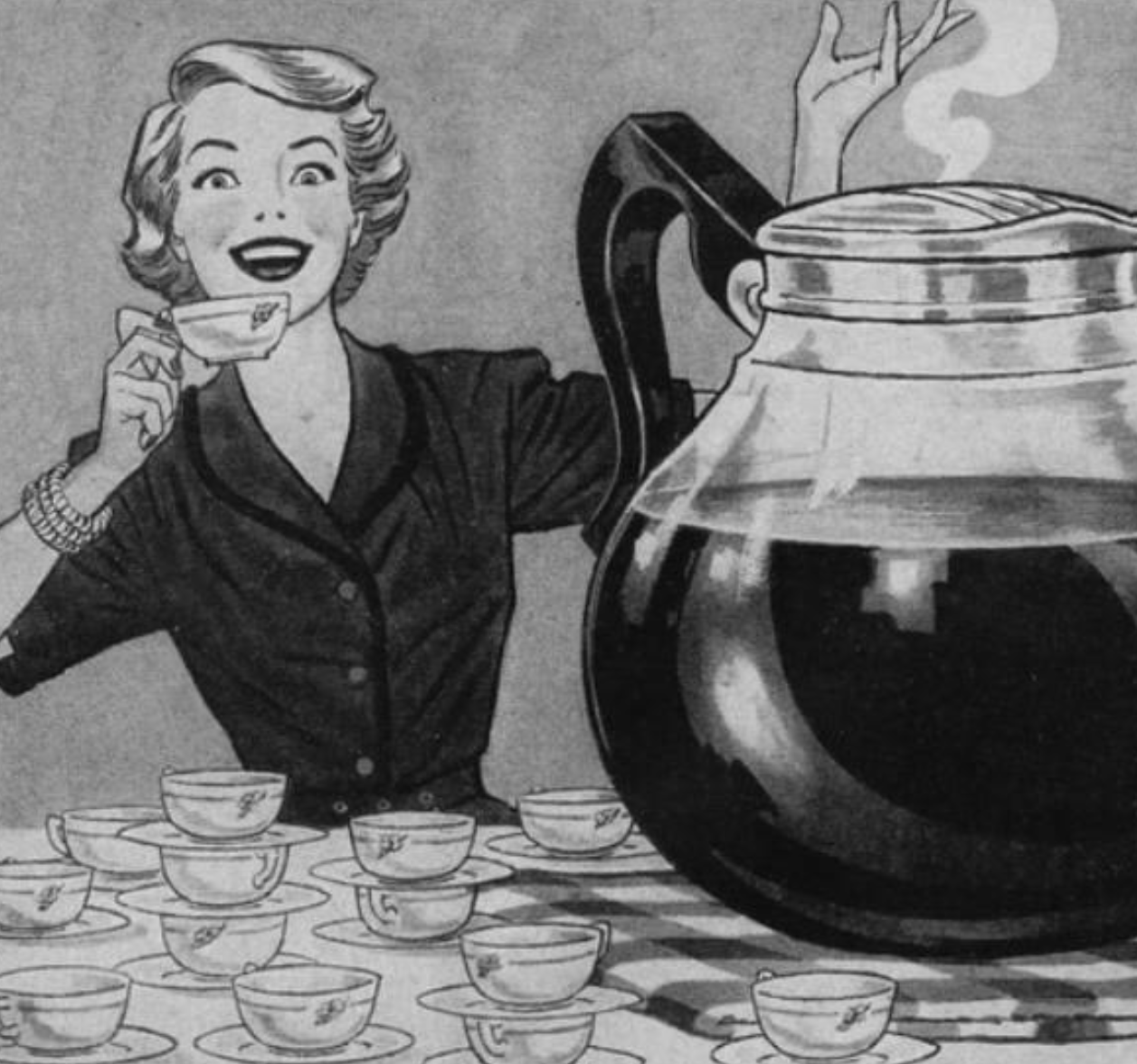 When I was a little girl I got one bad hair cut. Well it wasn’t horrible, but more was cut off than I had wanted. It was all it took for me to not let anyone except my mom cut my hair after that. This evening Maw-Maw cut all three of our little lovelies hair. Aub’s hair was really getting long, but is now shoulder length and adorable. Mad decided she wanted her hair shoulder length too and I reshaved the side of her head like she likes it. She couldn’t stop smiling. And this was Bitty’s first real hair cut aside from just getting her bangs trimmed. Now it’s a little past her shoulders and she loves it! 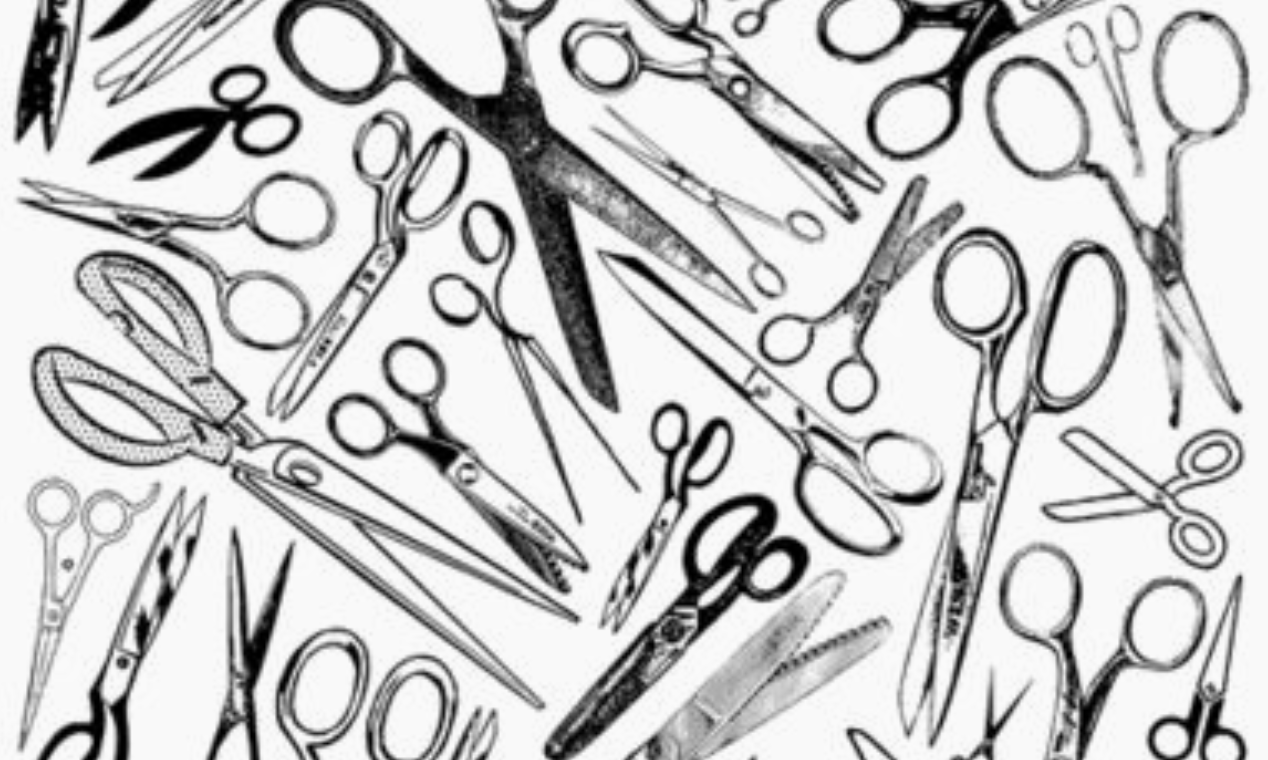