We love getting Violet updates! She may be bigger than the duck now! 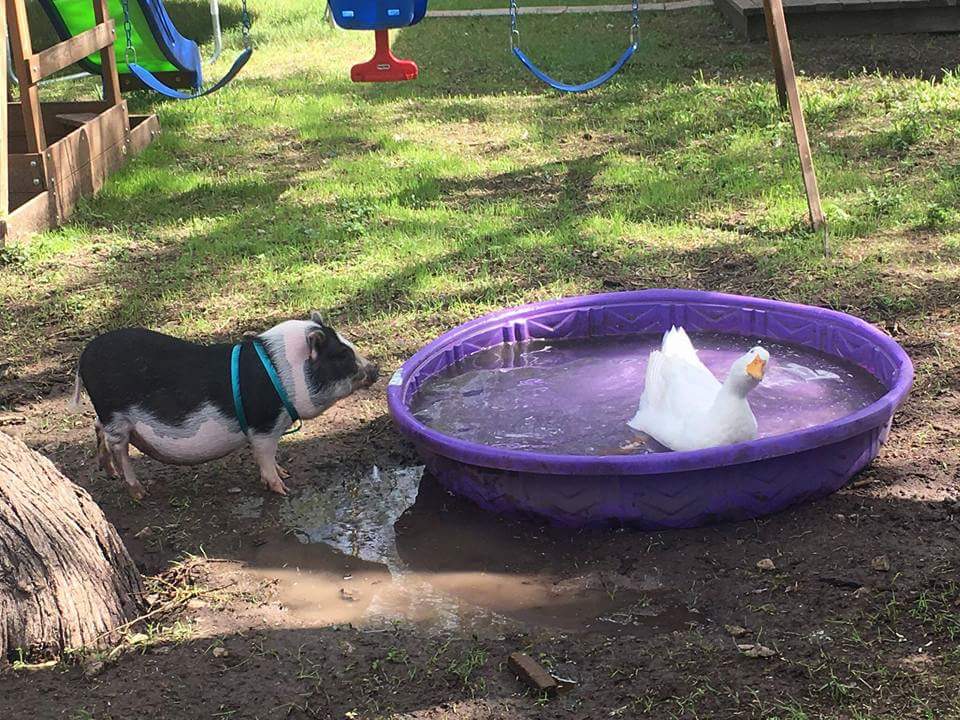 Still struggling with the fact that our sweet little Violet lives in another home now. It helps thought to receive precious photos and videos like this. Seeing her chasing those chickens and ducks around the yard is nothing short of priceless. Also, how sweet is it that Amanda reassured me that much as Violet would love it, all of that food isn’t actually for her, ha ha. 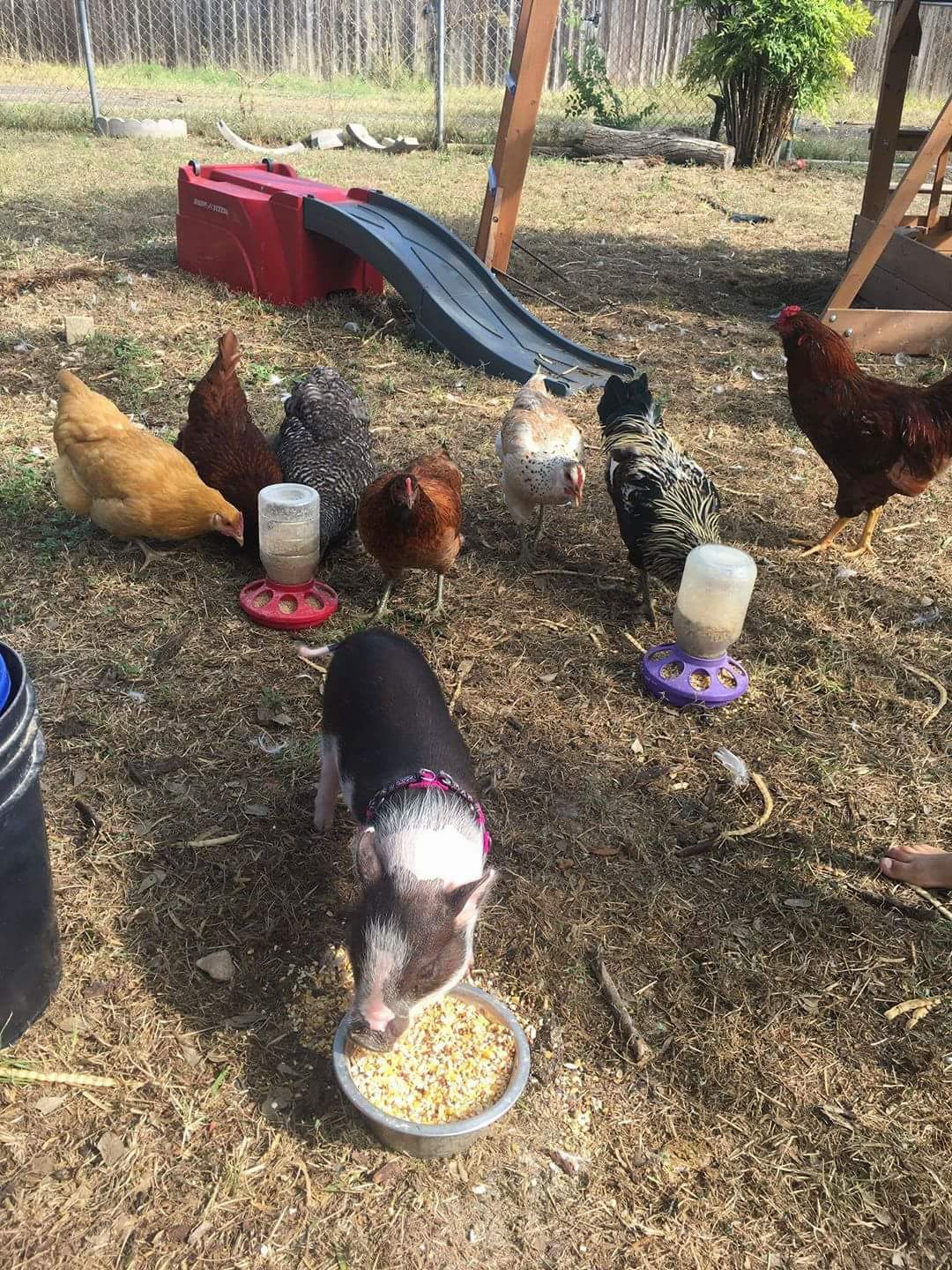 It was a decision I saw coming. One we were totally in denial about. As awful as it felt and as hard as it was to let go we had to rehome our precious little Violet. I’m so incredibly heart broken. Unfortunately several things were adding up for us to know it just wasn’t fair to keep her here. Our little 16 year old, Najah, and 11 year old, Mardi, were having a really hard time fully adjusting to our little 2 month old piggy. They are old and set in their ways, she’s a playful piglet that doesn’t understand why they growl at her when she relentlessly roots on them or attempts to nibble on their ears or tails. Najah has never ever been violent, but I didn’t want to wait and see if there would be the day. Oddly enough, he has truly been the most patient pup when it has come to our children and grandchildren. And while Mardi has fully adjusted to our family and Najah we are still learning her demeanor, so we had no idea if she would really reach a breaking point with Violet either. It wasn’t something I was willing to ignore, no matter how much it kills me/us to see her go. Thankfully we found an amazing family with very similar views and values as ours that have happily welcomed her into their home. I spent antire day talking to her before deciding they were a good fit for her. Amanda even offered to let us visit any time. It’s probably a good thing they live two hours away, or I would want to visit often. Now our sweet little forever loved Violet has 7 chickens, 9 ducks, 3 kiddos, and a new mama and daddy to adore her. No more grumpy growling pups, but I have a feeling she will give those chickens and ducks a run for their money. Our home already feels so different without her. Having Violet here was very much like having a new baby here, minus the diapers and she let us sleep at night. She was my little shadow. She cuddled me for naps. She oinked her little tail off if I was cooking. She loved all of her toys. She adores belly rubs. And got way better at bathtime. Thankfully the girls are taking it better than expected, they were sad to see her go, but understood our reasoning. Some day we will no longer live in a home with an HOA that could potentially fight us over having certain animals. Someday we will own sprawling land far away from here and Matt promises me all of the piggies, chickens, and mini goats my heart desires. I’ll forever be thankful for the summer my children and grandchildren had a piggy friend. That our children will always remember the silly moments spent with her on the beach and watching her go crazy over mini oreos, watermelon slices, blueberries, beignets, Creole tomatoes, and snowballs. You’ll forever be missed sweet Violet, but you deserve so much more than we can offer you at the moment.

If you are considering becoming a piggy parent do your research. And when you think you know all there is to being a piggy parent do even more research. Know the facts. It is one of the most rewarding experiences, and also so much work. Pigs are the 4th most intelligent animal behind chimpanzees, dolphins, and elephants. This fact can make it easier to be a piggy parent and also has the potential of making it more challenging. They are brilliant and will use it to their advantage given the opportunity. Also, don’t believe breeders that tell you your piggy will stay tiny. That’s complete nonsense. We went into it knowing Violet was all of 4 lbs when we got her at 4 weeks old. She was also almost 11 lbs when she went to her new home. There is no such things as a teacup pig. The only way you will keep your pig tiny is by starving them, which is down right animal cruelty. A healthy mini pig should range anywhere from 75 lbs at the bare minimum and up to 150 lbs. They don’t stop growing until they are 5. Their life expectancy is up to 20 years old. Be sure you’re not living in a town or city that has no swine laws. If you’re going to have a piggy as a domestic animal you really should have them spayed or neutered for countless reasons. As fun as it is (we learned this fact late in the game) you shouldn’t hand feed them. They will associate your hand with food and will eventually get food aggression. Violet was tiny, and was becoming this way with me, because I was her only source of food. Tiny as she is, that little snout hurts when she is plowing it into my hand and arms searching for food all day. I actually ended up with many bruises. We made sure to pass this knowledge on to her new family so that they won’t make the same mistakes we did. I don’t say these things to deter someone from wanting a pig. I say it because I now know statistically 95% of pigs are rehomed due to many of the above stated facts. Mostly due to size. That was the least of our worries, we were prepared to love Violet in all of her plumpness as she grew up into the beautiful girl she will be.  I guess what I’m trying to say is just know your piggy before you commit. 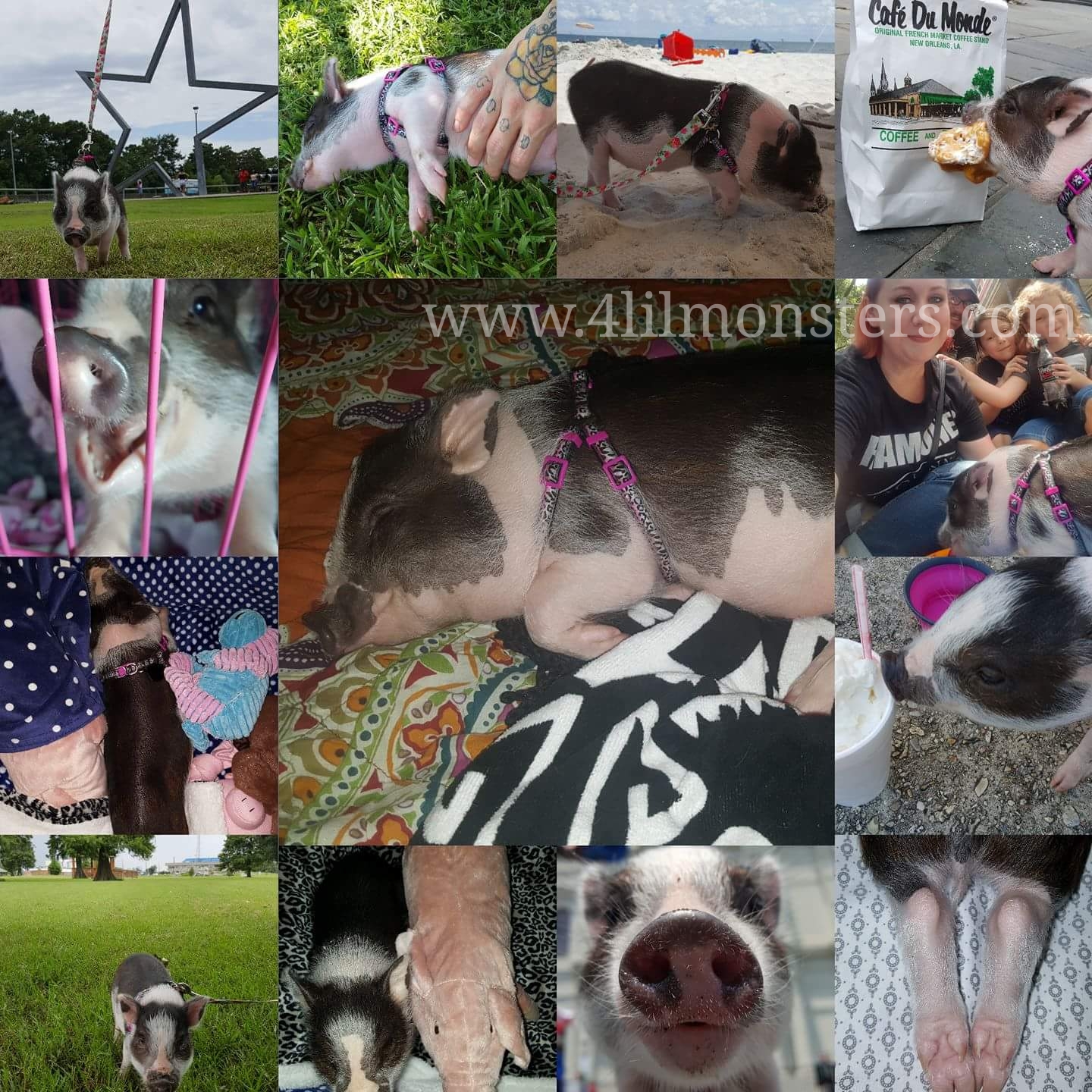 Working hard on the bonding with these two beautiful seniors and oh so sweet baby piggy. 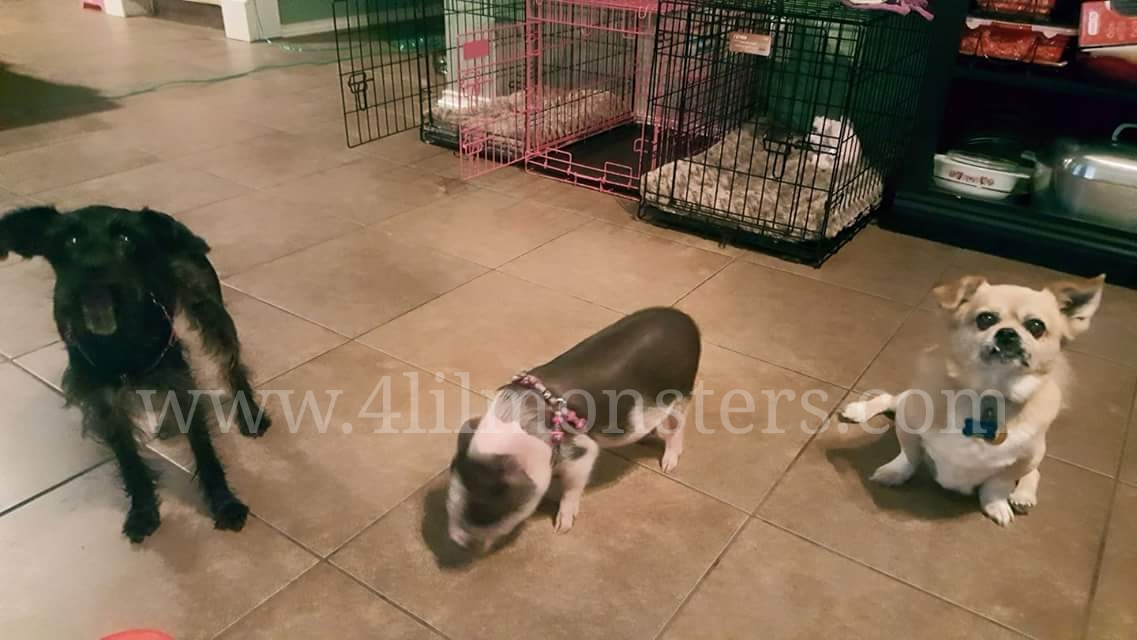 They all 3 love lounging in our bed in the evening. Even more so, they all 3 love sleeping ON me if they can get me to stay still, ha ha. 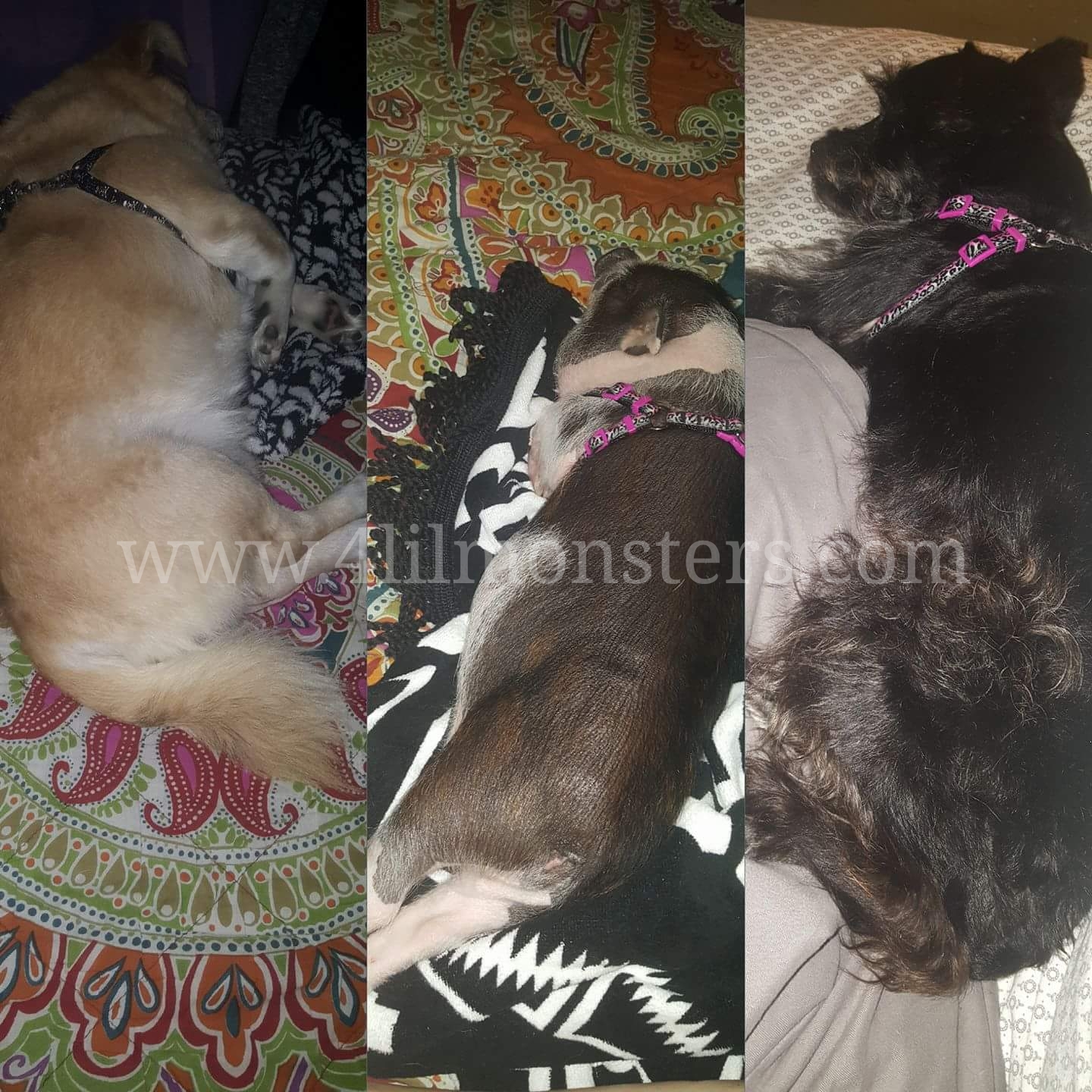 And so after two and a half weeks of fun spent in Louisiana, Mississippi, and Alabama with family and friends it’s time for us to head back home with this little piggy and our newest addition to our family, Mardi. Word on the street is Najah (16 years old and hates road trips now) and Maw-Maw really miss us a lot! So we loaded up early this morning and started the long drive home. Once again, they all handled the trip well and turns out Mardi likes car rides almost as much as Violet. Lots of fun memories were made and Gigi made us feel so at home the entire time! This drive didn’t have a ton of rain or traffic thankfully!

Violet & Mardi when we made it to the Texas rest area… 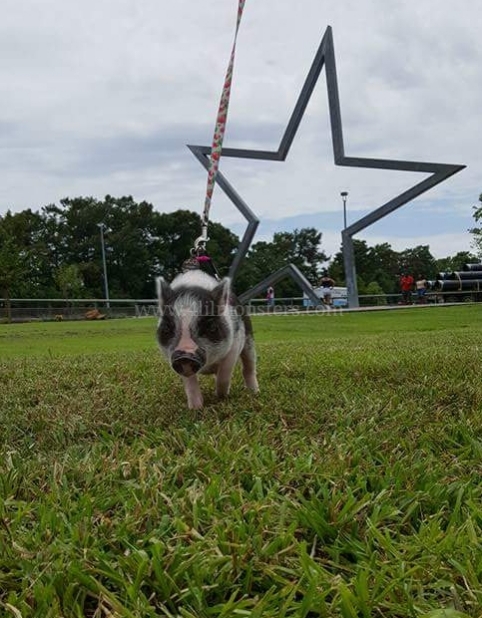 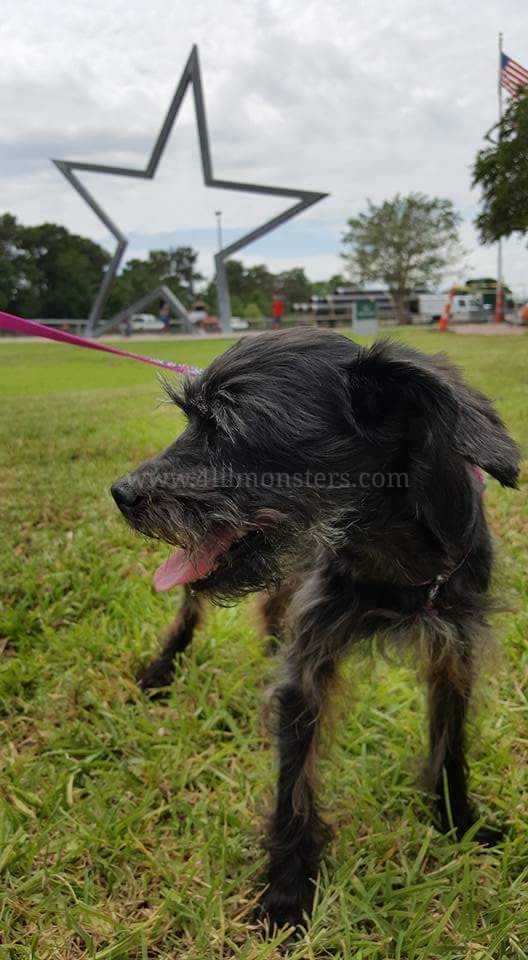 Got up early this morning for a quick run the the farmers market with Gigi for some Cajun eggs, Italian cookies, & produce before taking a day trip to Alabama for some fun in the sun.

The girls had so much fun taking turns burying each other in the sand and splashing around. Sweet little Violet rolled around and rooted in the sand the entire time. She slept hard after we got her rinsed off on the boardwalk before the drive back. It’s was a beautiful fun filled day that we won’t soon forget! 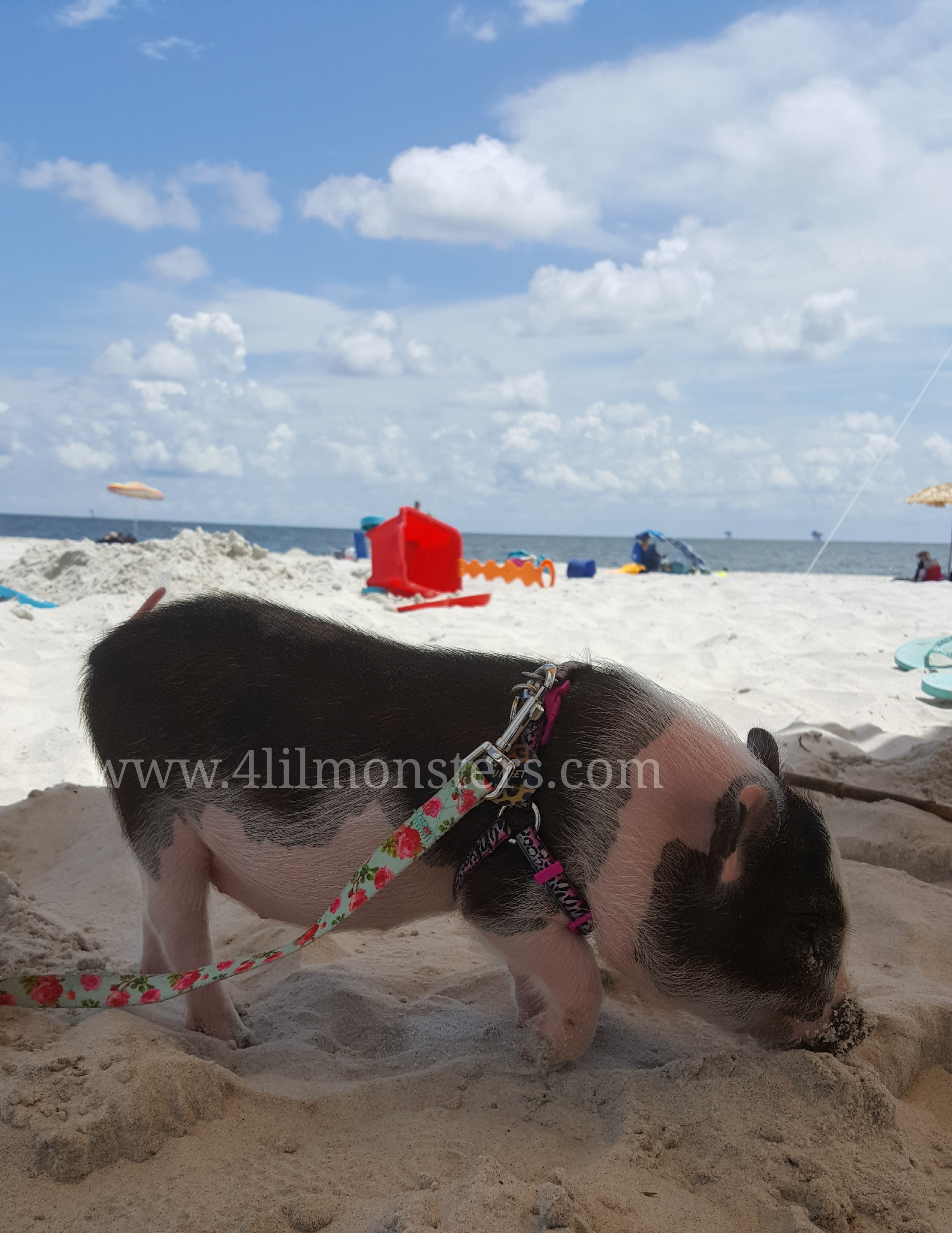 This morning we decided to take a trip to the Quarter with our 7 week old, Violet. After all, I did promise her a beignet. The girls loved talking to people about their adorable beignet eating piggy. 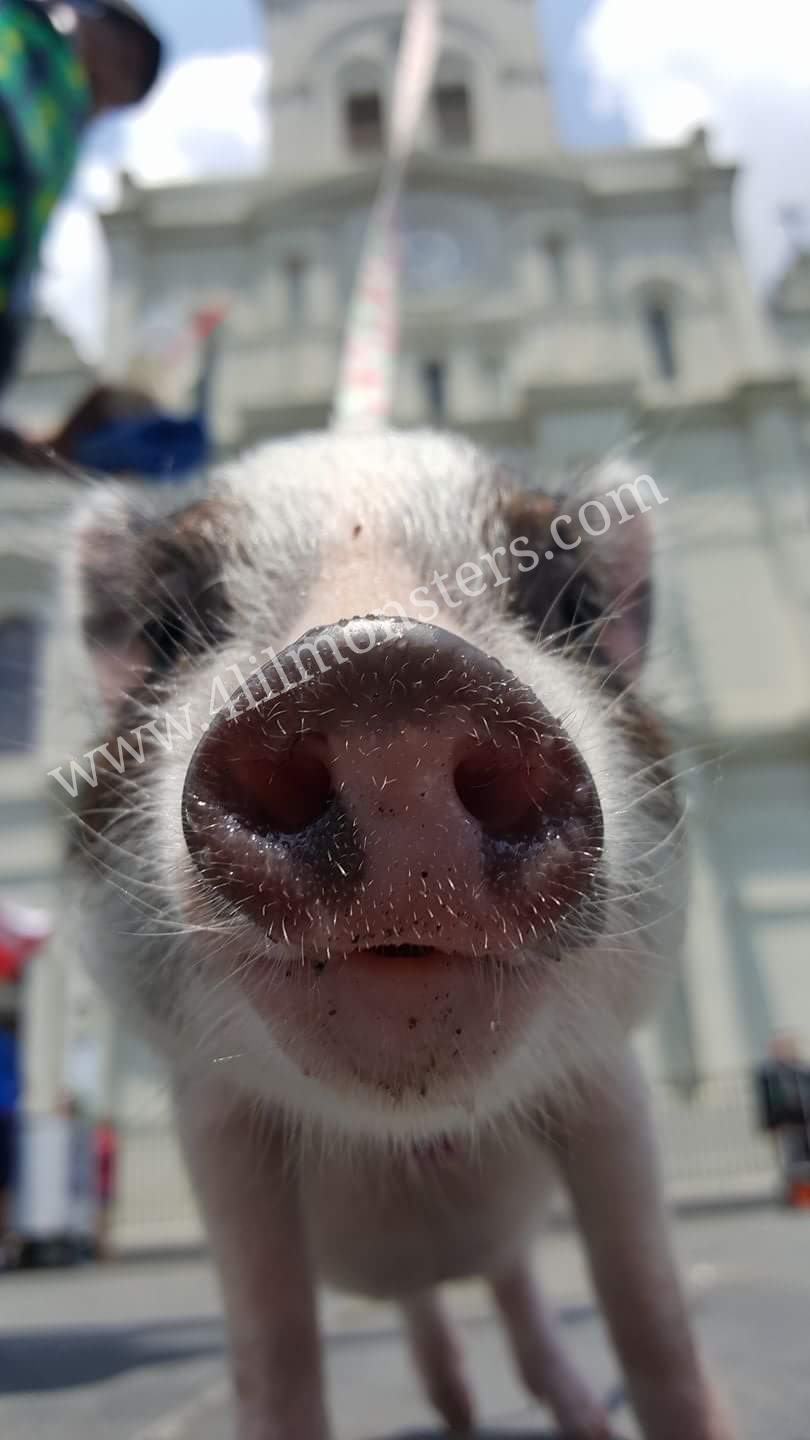 Today we traveled 600 miles with 3 little lovelies, a six week old piggy, and grabbed Gigi along the way. It only took us 12 hours due to weather and traffic, but the girls and Violet traveled so well considering the circumstances. Now for a couple weeks of fun in my hometown! 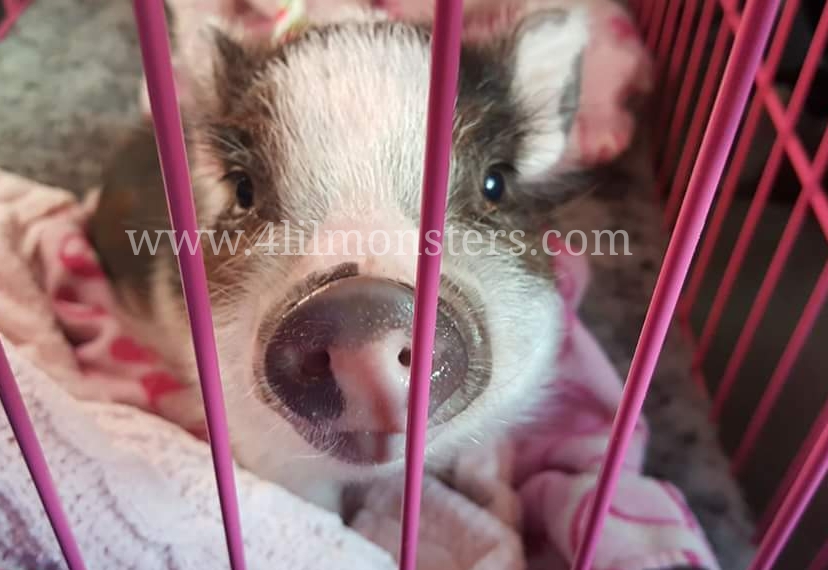 I am loving how well these two babies are getting along. Najah is 16 years old now, but he’s always been the most gentle boy with kids and other pets. And our little 5 week old Violet is very curious when he is by her. 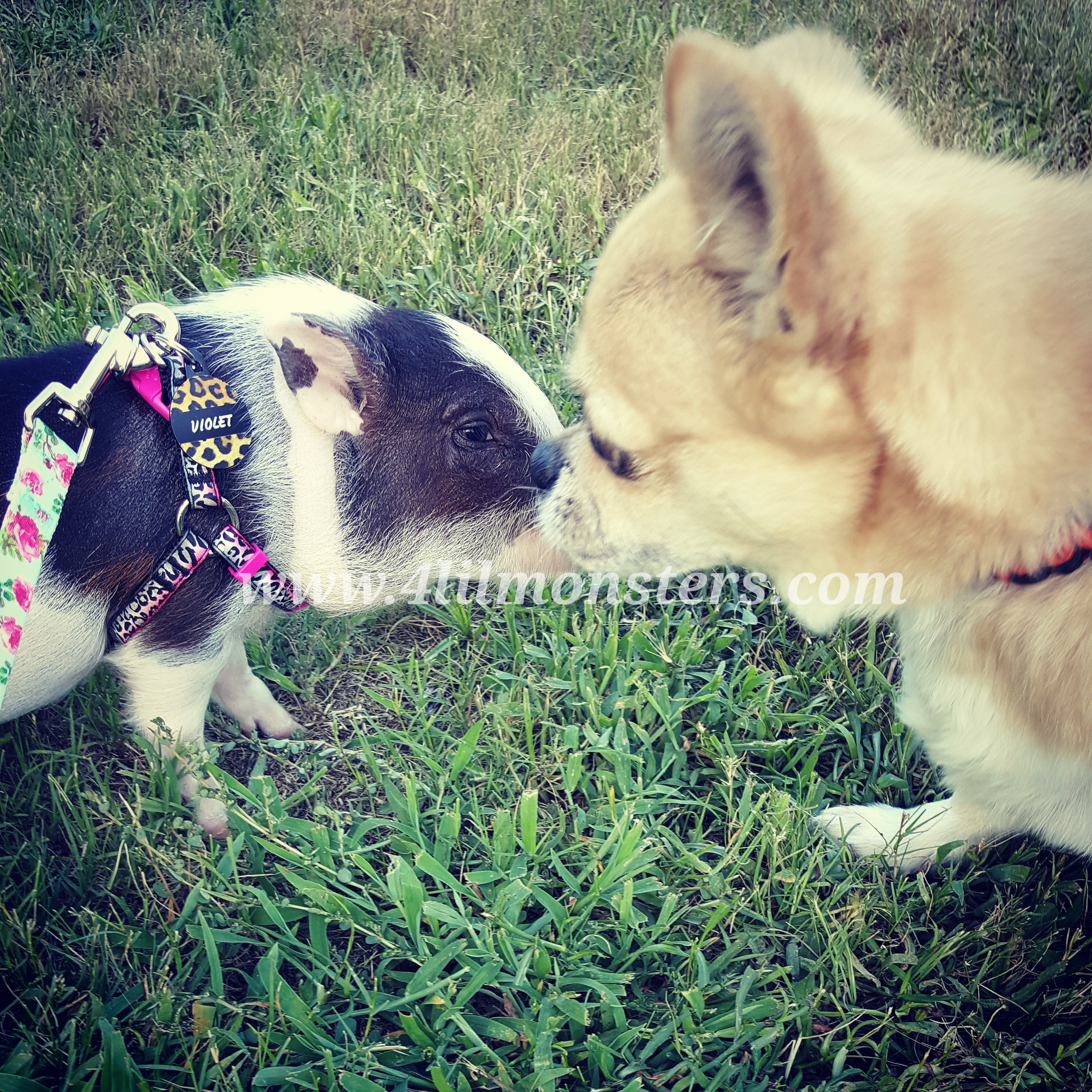 Welcomed our newest four week old addition to our family sooner than expected! 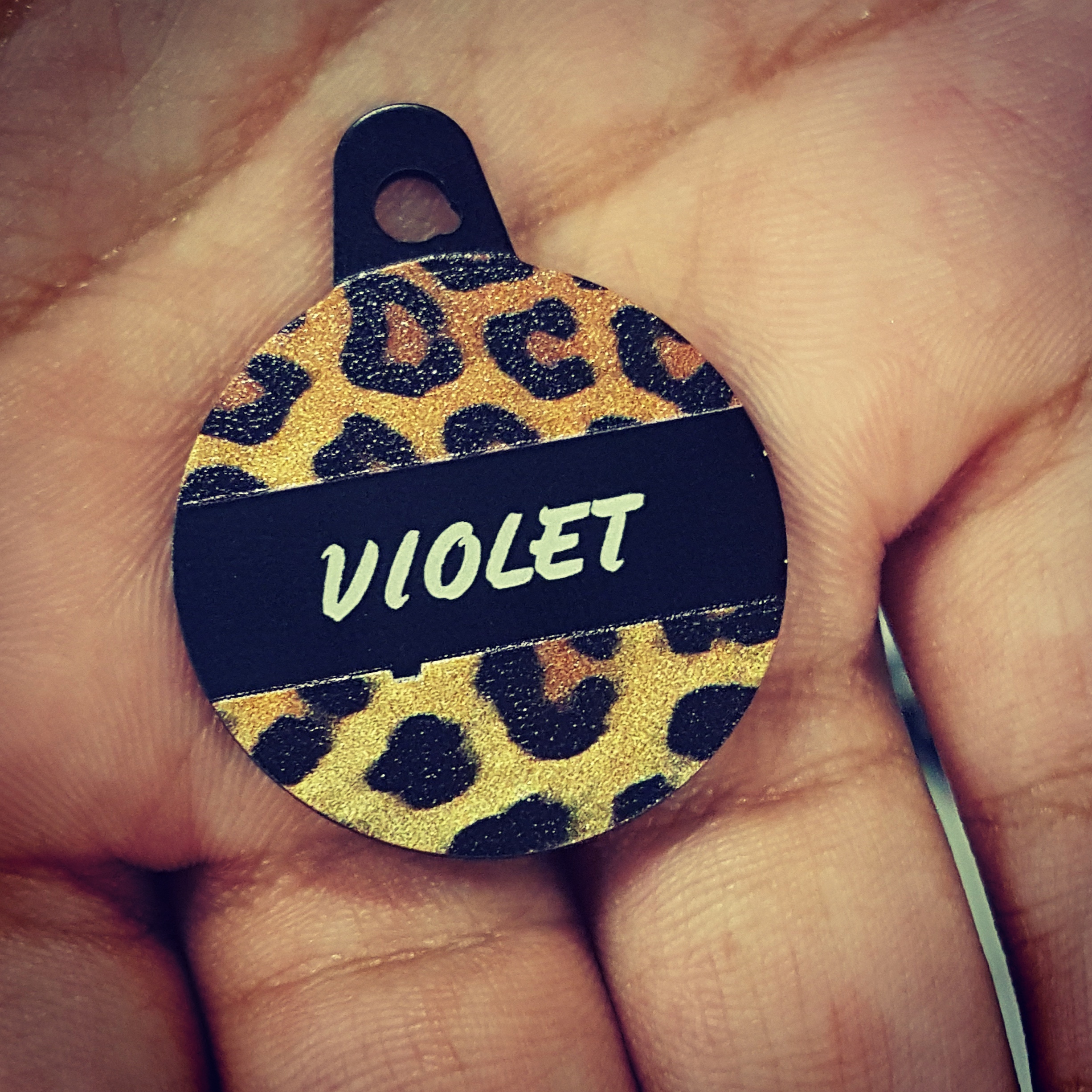